One founder and a kick-butt community of 40+ women on a pro-age mission.

Changing perspectives one conversation at a time.

We’re honored and proud to be leading a group of real 40 & 50+ women carving out their own paths with purposeful intent, and we’re unstoppable. Ageism is real and we’re working to rescript it as #workwives and friends for more than a decade. Watch us. We can and we will…with our power tribe of women living life in full color. #secondact #owningourage #betterthanever #gamechangers

We’re steadily losing the opportunity to stay in the workplace, level up, pivot careers, and receive funding to start up companies. We live in a youth-obsessed culture that sees women 40 & 50+ as past their prime, but nothing could be further from the truth. We’re living life in full color and don’t want to turn back the clock. After all, 40 is the new 40. 50 is the new 50. Heck, we don’t fear aging, but we do reject ageism. #ageisNOTjustanumber #morethananumber High schooler, Barbara Brooks, circa 1985 ready to take on the world.

I founded SecondActWomen in 2018 at 51 to combat gendered ageism as more of us were being aged out of the corporate community and overlooked in entrepreneurial circles. Because of that, the membership company delivers high-impact boot camps, conferences, retreats, and business tools to help women over 40 thrive in their businesses and successfully retain, advance, or switch careers successfully. After all, we’re not over the hill. We’re at the very top.

SQUIRREL! Coincidentally, women over 50 in the U.S. have a $15 trillion buying authority, yet we’re not valued. Go figure.

I started this crazy ride championing women in their 40s, 50s, and beyond when I, too, aged out of the corporate club. There I was, with an award-winning marketing career in shopping centers and mixed-use industries, when I suddenly became an accidental entrepreneur in 2011 and couldn’t find a new job for the life of me. What else is a woman to do but take things into her own hands, so I launched a marketing agency that grew revenue to six figures.

Today, as the owner of SecondActWomen, a triple minority at 56, black, and a woman, I relish telling my story, educating and amplifying middlescent female-owned businesses and career women. It’s our time, and as an #agepositivity leader and our SecondActWomen community, we’re helping these women design the businesses, careers, and lives deserved because… #womendontexpire.

Since my start in 2018, SecondActWomen and I have been featured in Forbes, MarketWatch, and PBS’s Next Avenue, presented four times at Denver Startup Week, and led workshops for General Assembly, Microsoft, and soon-to-be Western Union’s ERG group. In 2021, I was a semi-finalist in Forbes’ inaugural Women 50 over 50 list, and the company recently graduated from Facebook’s Community Accelerator program.

I’m a Colorado State University grad and Sigma Kappa sorority alum, a single woman with a 4.5lb pup named Riley B; my mom calls her granddog. And I’m here to say, “You can. You will. We’re all here to watch you.” Community of women supporting, leading, and sharing business, career, and life at 40+. Info and tools to grow by. 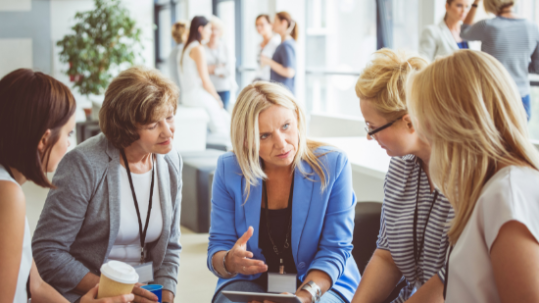 We’re always talking work+life on the SecondActWomen community on Facebook.​

Get business ownership, career and life news, tips and more curated for women 40+ and when you do, download your Personal Brand worksheet. After all, in business (ownership and career professional), you are a brand. You should have your own brand statement to back it up.
Play Video

How It All Came To Be

We insist on changing the narrative.

Hear how Barbara started it all from passion to purpose. They share their back story with the national audience of Daily Blast Live.

The inspiration behind me... My backbone. My heart. My love.

Children come in all shapes, sizes, and species. Featured in Forbes, Next Avenue, and The Denver Post

Our messages of ending gendered ageism and women over 40 making power moves are starting to be heard.

We’re on a mission to set the record straight about you: women 40 & 50+. The time is now to challenge the status quo and reclaim our narrative. We know we’re preaching to the choir when we say that life is just getting started and we’re done being told otherwise. Read up on SecondActWomen and its communities. Just click a logo and go! “My 40s have had me jumping into my second act everywhere. I stopped trying to be who I thought I was supposed to be and stepped into authenticity.”

SecondActWomen is a subsidiary of Bloom+Co Presents, a minority- and female-owned company.